Lay Down the Polarity

What happens when you cut off the negative end of a magnet? You double the amount of negative. You now have two magnets, both with negative ends.

Positive and negative go together, you cannot actually get rid of the negative while also ‘wanting’ the positive. Every attempt will ultimately empower what you’re trying to get rid of.

Polarities such as these can be found everywhere. In fact, every disturbance or conflict is an expression of such polarities trying to conquer the other side, while also trying to survive its own illusion as something that is separate from the other side.

As if ‘that’ was separate from ‘this.’

You cannot be ‘that’ without also being ‘this.’

Opposites are Forever Tied Together

Whatever has an opposite, will forever be tied to its opposite. However, these opposites are only empowered in the human experience through a belief in them as separate things.

The concept of ”tall” is made ‘real in experience’ by my belief in what I think is ”short”. There is nothing that is actually tall outside of my declaration of what is short. And, what I think is short, isn’t actually short. It’s not REAL that it’s short.

The illusion of this will keep someone (or groups of someones) spinning into a drunken daze of chaos, conflict, and suffering. There is no real way out as long as one believes there is a real separation between 'this' and 'that.'

Whatever you want to get rid of, you are empowering.

Take suffering for example. Suffering is a polarity that works in unison with Joy. The more you understand suffering, why it shows itself, the less you will want to get rid of it. Trying to rid the world of suffering, is to completely misunderstand the nature of suffering, and will likely only create more of it.

AND... at the same time, you’ll be under the innocent spell of illusion and think you’re making progress. Your liberation from suffering is “almost complete! just a few more Jews to get rid of,” 6 million later. Or... “almost complete, our side is about to win!” after a year of unkindness toward the other side.

This journey of cutting out the negative is celebrated by the ego because it looks like it found a solution. However, it’s always at the price of expressing violence and a complete lack of compassion. In a way... (sincerely) you're doing the thing you're trying to get rid of. 🤦🏽‍♂️ 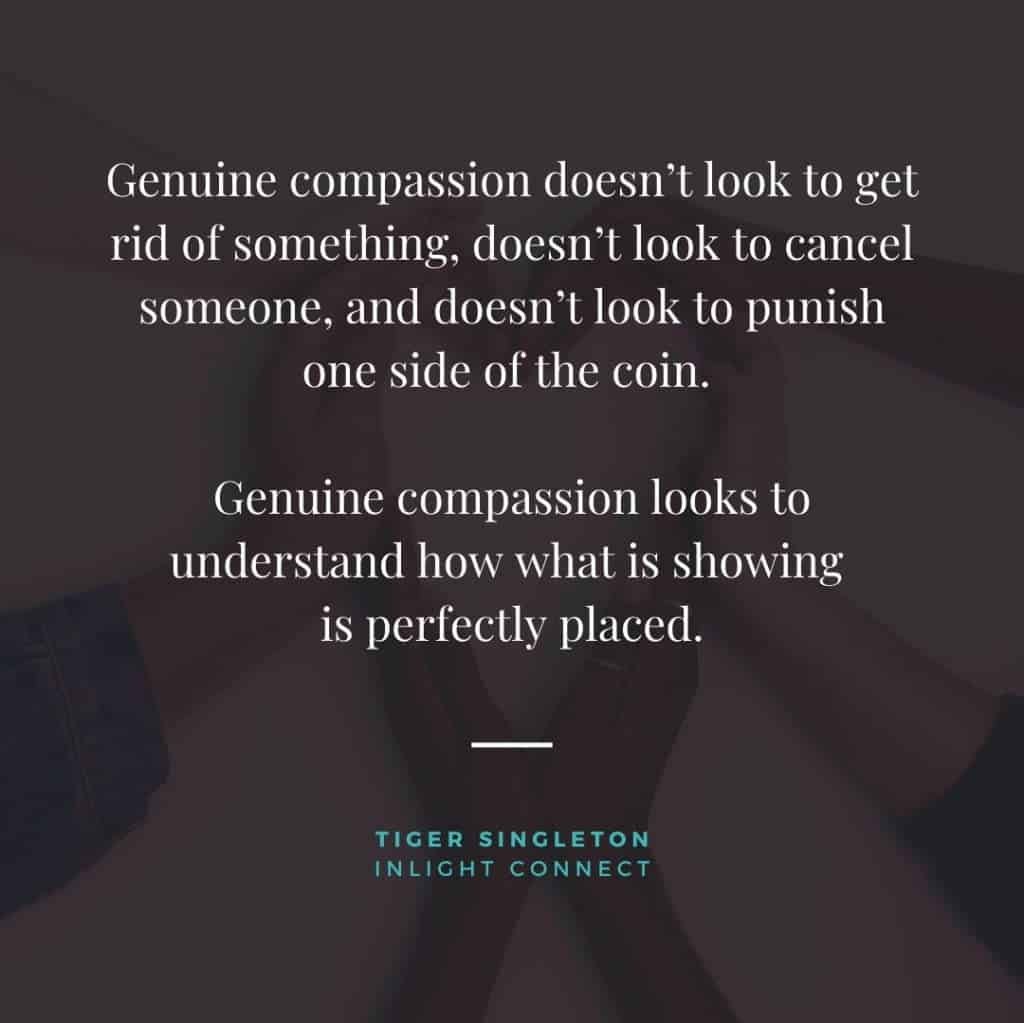 The nature of a balanced and harmonious polarity is an understanding that both sides are of equal value; and... the only thing that can create an unbalanced polarity is through overvaluing one side. It’s recognizing that each side is also the other side, equally. Which invites complete forgiveness of the side you see as less than worthy to be what it is.

“I’m sorry for judging you. I’m sorry I separated you from the whole. I’m sorry I thought you were less than. I’m sorry I blamed you as -in the way of me capturing an illusion to the positive. Thank you for being what you are, so I might see the error in my perception.”

If what you’re fighting against becomes louder, that’s life’s way of restoring the balance. It’s not wrong that it’s louder, it’s necessary. It’s louder because you’re clinging to the other side, it’s your own clinging that’s tipping the scale in the other direction.

You don’t have to like suffering, but... it has its place.

You might not understand its place, however, just because you don’t understand something, that doesn’t mean it’s without value for the WHOLE.

If we separate ourselves through labels, believing we are this and they are that, then... real compassion is impossible. Sure, the ego has its own flavor of compassion but it only reinforces a separation.

Let me says this as a pointer... and you can see how it sits with you. "It can be quite narcissistic to call someone a narcissist."   If someone thinks they are an empath (as a real thing), then... they MUST find people who they think are narcissists. That's the only way they can be the opposite. Also like... if you want to be a "smart person," you have to look for "dumb people." You cannot be a "smart person," without identifying "dumb people." Every time the ego thinks it finds a dumb person, it then celebrates its own fantasy of self-importance or self-identification ("I found myself!").

This points to why there can be so much social energy around labels such as narcissist and empath, people think "Oh! I found myself, this is what I am, this explains everything, it makes sense to my mind that sees separation." However... in order for you to be that, then you must define and identify the opposite. And... because it's "Identified" with, it becomes a life or death situation. Meaning... one will become violent in order to protect their identity.

So, the identified empath becomes violent to the imagined narccisist, which is the quality of the perceived narcissist.   The one who sees other people as an 'aggressor' then becomes an aggressor toward the perceived aggressor. The one who sees 'greedy' people, becomes 'greedy' by thinking the greedy people shouldn't be what they are. It's like... "I see people who are too controlling, so, we should get rid of them." Which is trying to control them. Or... "that person is selfish, they only think about themselves." Which is you thinking they should think about you. So, who's being selfish?

Labeling people is a quick way to distances ourselves from them and to distances ourselves from the truth of ourselves. The ego doesn't want to see how it's own separate sense of identity isn't real, so it constantly reinforces it (its identified polarity) by constantly labeling others.   If one were to see through their own false sense of separate self, they would see very quickly that other people are not who or what you 'think' they are, and labeling them as anything would be utterly impossible. Beyond the labels, beyond any attempt to define (judge), what you will see is every human being that is exactly like you, is an extension of you.

Another way to illustrate (as a pointer)... If you are looking at five trees, you can start to label each of them, as they all appear to be different. Some are tall, short, crooked, or even... in the way of other trees. HOWEVER... what you don't see, is that these perceivably separate trees all share the same root system. They are literally the same tree, but you don't see that because you're looking at the surface, at what the mind sees as separate things. Are they REALLY separate? No, however... yes, it can look like that. But what things "look" like, is not what things are.

Whatever you say about one tree, you're literally saying about all the others, since, in fact, they are the same tree.   It's important to see that all of this mental commentary about other people, what they are or what they are not, is fundamentally based in the assumption that there are separate people. Yes, I get that it looks like people are separate, it looks like we are our own thing operating independently. However, that is only a story we tell, a story of separation and we then believe in it. In the same way of telling a story that the trees are separate trees.

Guess what? You'll even find a large majority of people to agree with you that the trees are separate. In fact, most people will agree because it looks like that, and, furthermore, they see themselves as separate things, so they are looking out into life as if separation is real.   If you think you are separate, then it's a life-and-death situation when it comes to seeing separation. It's a matter of egoic survival, hence... all the perceived conflict between human beings.

Yes, you believed you were less than, and then had to compensate. That compensation will always come with some flavor of violence. Primarily, because it’s violent to see ‘yourself’ as less than, so that violence gets projected outwardly.

The good news is that you’re not less than or more than, you’re equal; exactly where you’re supposed to be. It’s really quite beautiful. This is where real love starts to shine.

There are no comments yet. Be the first one to leave a comment!